My dad had the bad habit (which I unfortunately inherited) of not finishing what he started. Where in his professional life he was fairly diligent and hard-headed, in his creative writing he tended to abandon his fanciful ideas when he got bogged down in the practicalities of plot construction. When he did finish a story he’d often lose faith in what he’d written and tuck it away in a desk drawer, never to see the light of day.

I’m not going to second-guess him and publish his fragments and first drafts. Here are a few of my favourites among the stories, poems, and articles he did manage to complete. 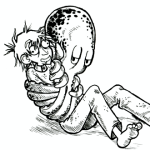 Through The Glass Darkly
From Bailey’s Illustrated Monthly, 1987