My dad told variations of this tall tale all his life. It was only after his death that I discovered he’d once written it up as a short story. This dates back to 1969-70, his first year in the tiny Indian village of Poplar River, Manitoba. 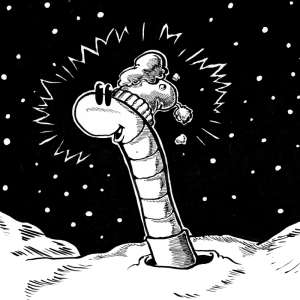 Oh, they’re nice. Who made ’em? Flora? She did a nice job. But then she should. She’s been making ’em for years. How much she charge? Fifteen? Cost of living is going up. Last year it was only twelve. No, it’s reasonable. Heck, up in Norway House they’re asking thirty and more.

Sure they’re warm. Long as you don’t get ’em wet. You won’t be able to wear ’em til after freeze-up, or much after middle of April. But in winter they’ll keep your feet nice and warm.

No, it’s funny, but I’ll tell you right now, you teachers’ll be about the only ones wearing ’em. Most of the men wear those big Greb workboots, and the women, specially the girls, they wear the same boots you see ’em wearing in Winnipeg, Toronto, Montreal. Sure it’s silly. Lots of teenagers freeze their toes. But girls will be girls. Long as something looks good, to heck with the frostbite.

Comfortable? You bet. After one winter you’ll never want to go back to high heels.

I don’t really know, Mary. Depends how often you wear ’em. I’ve still got a pair I bought three years ago at Island Lake, but then I don’t wear ’em that often ‘side from social visits. If I got to tramp through the woods I prefer wrap-arounds, they’re a bit cheaper and you don’t have to worry about damaging the beadwork. But oh yeah, they’ll definitely last you one winter.

Here, let’s see ’em a minute. Hmmm. See, she used commercial hide. It’s not hard to tell. Commercial’s generally quite a bit softer than home-tanned, smoother, more even thickness. Probably the easiest way to tell is just smell the hide. Here, take a whiff. It’s sort of a nice smell, like leather coats, baseball mitts. If these’d been made from moosehide Flora tanned herself, you’d smell that porridge guck they soak the hide in, plus like a woodsmoke odour.

I dunno what’s best. Depends what you want with ’em. If you’re just gonna wear ’em round here a year, then take ’em back down to Toronto and hang ’em on your wall for a souvenir, they’ll do fine. Myself, I prefer the home-tanned ones. Generally the hide’s a bit thicker, which means they’ll wear longer, and a bit rougher, so they’ll grip bare ice better. And you don’t have to worry so much about the snow worms. Now, if a person had a combination of…

Snow worms. C’mon, you’re pulling my leg. No, I’m not pulling yours either! I should be so lucky.

Seriously now. You haven’t heard of…? I thought you all were university graduates. Didn’t you take any history courses? Or have they all been dropped now they’ve got “continuous progress” and all that nonsense? Did you never hear of Hearne? Thompson? Henday? How about Champlain?

I’m glad to hear that, anyway. Well, in all their journals they made mention of snow worms.

Okay, alright, if that’s what you think we’ll just drop the whole subject. I don’t want to get your backs up. We’ll be seeing a lot of each other so we’d better get along. Tell me some more about Toronto. It’s been years since I last saw Yonge Street…

Alright, alright! I’ll tell you what I know. You can have a good laugh at me and then we’ll talk about something uncontroversial, like politics.

First, I guess I better fill in the gaps in your education. I think Samuel Champlain was the first European to make mention of snow worms, or whatever they call ’em in French. Don’t hold me to that, for all I know Erik the Red mighta been first. All I know is, in 16-something-or-other, Champlain was visiting a Huron encampment one summer and he noticed a lot of the children were minus toes, and a lot of others had these ugly-lookin’ sores on…

Look, I told you you could laugh at the end of the story, but at least hear me out, okay?

Sorry, didn’t mean to flare up at you. It’s just that snow worms are sort of a sore point with me. As you’ll hear if you let me finish.

So where was I? Oh yeah, Champlain at the Hurons. So, like you three, Champlain didn’t believe the Indians when they told him the injuries were caused by worms coming up out of the snow. But unlike you, he was polite enough not to say so.

But that winter, and please remember Sammy-boy was trying to establish a colony in this pleasant country of ours, some of his men discovered their boots had had it. Now there weren’t too many shoe shops along the St. Lawrence in those days, so the men went, cap in hand and with soles a-flappin’, to some great-great kin of Flora’s, and a couple days later they were running around in wrap-arounds.

Everything went along nicely for most of the winter, not counting the occasional brush with Iroquois and one or three cases of scurvy. But toward spring, like about early March, some of the men were wearing through the heels of their wrap-arounds. But, not to worry, winter can’t hang around forever, and meantime an extra pair of socks should keep the snow out.

Then one day one of the men showed up at sick call or the hospital or whatever they had in those days. Said he had a sore toe. When the doc or barber or whoever looked at the foot he found an open sore. And after probing around in it, much to the discomfort of his patient, the doc pulled out…

Well, he didn’t know what. He thought it was some kinda tapeworm, ’cause that’s what it looked like, only with a very fine coat of fur. They were trying to figure out how it…

For the last time, I’m not kidding. Tomorrow, go see the nurse. She has one mounted. She found it when she was at Big Trout in Ontario, had the thing stuffed. Just go over and look at the floor lamp next to the rocker in her living room, it’s curled around it.

But to get back to New France. That poor guy I was talking about made history, even if you three never heard of it, but lost his toe to infection. And before the St. Lawrence was free of ice, four more men had worms pulled out of their toes. Next winter, to make a long story somewhat shorter, Champlain ordered his men to get new wrap-arounds before the old ones wore out, and after that there were no more problems with the worms

Unfortunately, some of the other early explorers didn’t learn from Champlain’s experience, and a lot of ’em went back to Europe minus a toe or two.

Hey, Carol-Ann, how about putting on the coffee-pot? And could I grab a smoke from somebody? Thanks. Instant’s fine. Anyway, that’s all I can tell you about the…

No, no, you won’t have any trouble long as you don’t have any holes in your mukluks. As I was saying earlier, that’s why I like home-tanned hide, it seems to last longer.

Sore point? Did I say that?

Oh yeah. Well, as I mentioned this afternoon when you got off the plane, I lived round here most of my life. My dad was a trapper for many years inland, then he ran the fish station at Spiders til he died a few years ago.

Anyway, one time he was out on his trapline, I guess it woulda been a good twenty years ago, he wore through his wrap-arounds, and…yeah, he lost his big toe, almost lost his whole foot. The infection was real bad. He didn’t help his cause any by walking home ninety miles with a whole winter’s catch of beaver on his back. Aw, it was too bad, but he shoulda known better.

But that’s enough of the snow worms. Now you know what to look out for. And relax, lots of us have lived up here all our lives and we still got ten toes. Maybe eleven. Now, does anyone play cribbage?

“Hey, Ann, how did you manage to catch this snow-worm?”

“I just asked how you caught this snow-worm.”

“Oh, Carol-Ann, who told you that old story?”